I’m a man that deeply understands my strengths and minimizes my weaknesses. 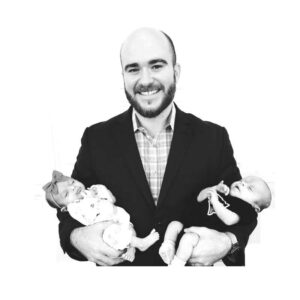 I was raised a musician. I began playing the drums at the age of four. Shortly thereafter, I found myself performing at reputable venues all along the east coast at the tender age of eleven. The dozens of performances spanning multiple years allowed me to build many important and wonderful relationships. It’s also where I learned how to run a business, and when I fell in love with the idea of entrepreneurship.

Throughout high school, I blended my drumming gigs with my knack for sports. I studied during the day, played baseball in the evenings, and still somehow found the time to teach myself how to leverage the power of the internet at night. After all, I had my music to promote and I could connect the world to my band’s music with just a few clicks and a MySpace account.

After high school, I opted to attend the University of Central Florida in Orlando so that I could refine my business acumen in an active and thriving music scene. While I continued playing live shows and recording with bands, I decided to take a more active approach to the business side of the industry. It wasn’t long before I figured out unique ways to leverage my online marketing skills to benefit other musicians in my community. A few months later, I launched a full-service talent agency called Endagon Entertainment. The agency focused on representing independent artists by sending them on tours and monetizing unique ways musicians could make a living.

Prior to graduating from UCF in 2008, I had spun the talent agency into a full-service service marketing agency called Endagon Studios. We worked on large campaigns for Coca-Cola, Miller Lite, Warner Bros, and Disney (to name a few). Our specialization in organic channels made our service vastly unique in the market. We ultimately became one of the first agencies leading the charge for business blogging and tweeting back in 2007.

As Endagon grew in size to 49 employees, so did other opportunities. I became a Board Member for the local nonprofit Rock for Hunger, launched an in-house incubator for web applications, and sold the talent division of the company.

Between 2008 and 2011, we launched Songclash (an online music competition app), Jamblr (an online collaboration tool), Skatterband (a content distribution tool), and I took on the role of Chairman of Endagon.

In 2011, I helped to grow a globalization technology 2x over the span of 5 years by building out a team of skilled global marketers around the world and engineering performance products to drive the success of their clients’ websites.

I then entered the employee benefits space in 2016 with a benefit administration technology, which I built single-handedly while serving as an Officer of a successful practice in South Florida. That business has become a full-service solution for startup leaders to clear their heads, collaborate with a community, realize their ultimate visions, and take care of their employees more seamlessly.

After that, I served as the Chief Information Officer of a $20 million media company for over 3 years.

Now, I’m the Captain of the Ship for a mental health organization poised to impact the lives of over a billion people.

I also invest in startups through my fund called Patient Ventures, coach entrepreneurs at Hire Skies, help to build community around the Stacks Blockchain (and City Coins), attempt to save the planet with Artsy Farms, and help small businesses leverage their website and the internet as a whole through Awesome Internet.